Directed by Sam Mendes, 1917 is a First World War epic that has been garnering buzz for its cinematography, with long takes and seamless editing giving the illusion that it was filmed in one take. With both the Golden Globe® for Best Picture (drama) and Best Picture honors from the Producers Guild of America Awards under its belt, it now enters the Oscar® race as a potential frontrunner.

1917 came out of the gate strong with an initial limited release into 11 theaters across Los Angeles, New York, San Fransisco, Chicago, Dallas, Washington DC, and Toronto, exceeding expectations and breaking records. Throughout its opening weekend, it averaged $52,383 per theater, growing to $56,154 per theater in its second week. It’s rare for a film to do this (average more than $50,000 per theater) twice and in more than 10 theaters. With only two other films having achieved this (Star Wars: A New Hope and The Blair Witch Project) such a performance may have been an early indicator of the award show success to come.

The audience that helped 1917 make such an incredible debut looked primarily to be made up of frequent moviegoers (54.6%, which is well above the average of 45%). We also saw a large number of male moviegoers attending, 24% of which were between the ages of 25 and 34, with 75% of the total audience over the age of 25. 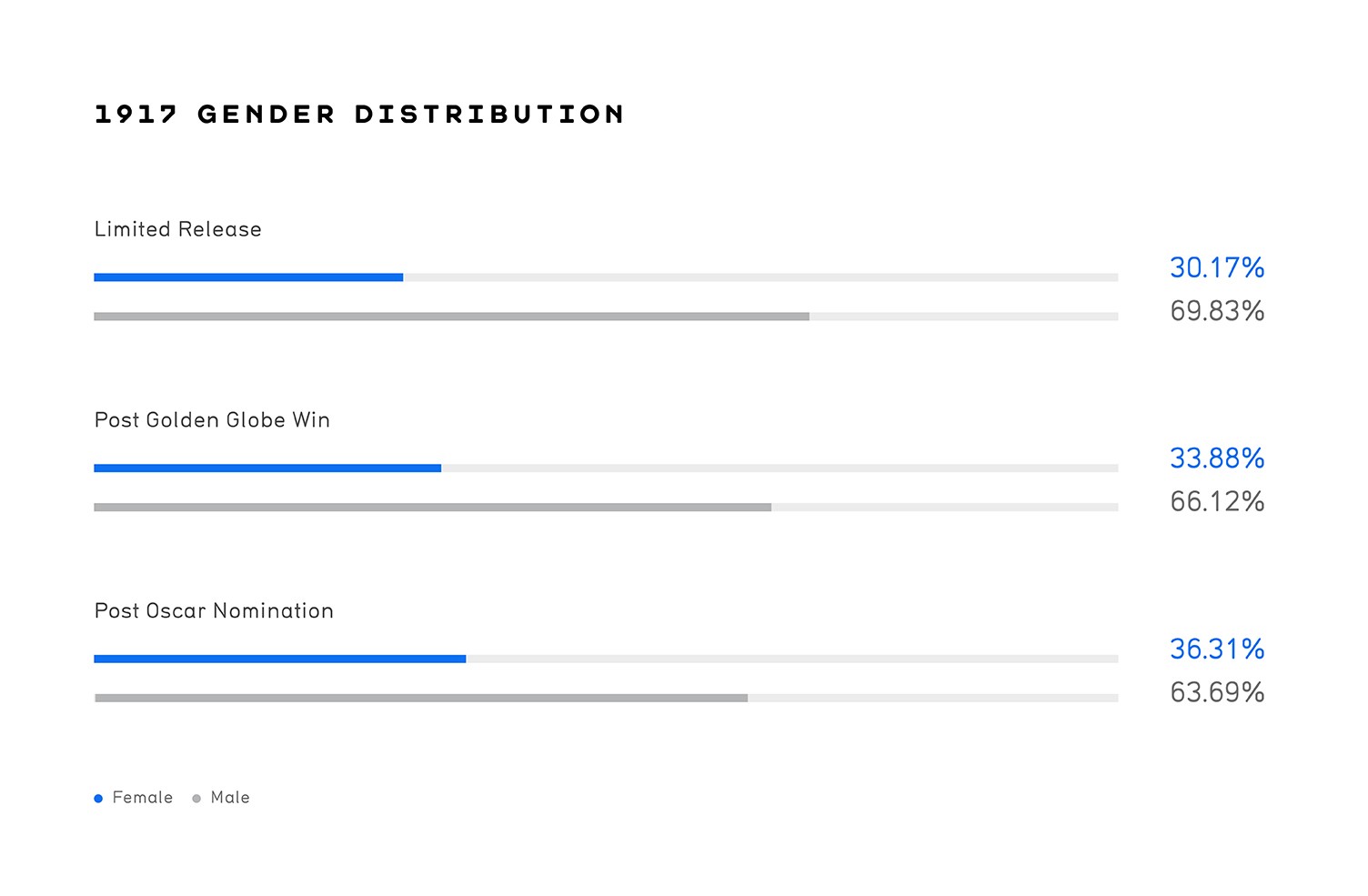 1917’s audience has been largely made up of male moviegoers throughout its run but has attracted a higher female attendance after each milestone.

While 1917’s Golden Globe® nominations may have been fairly anticipated, many were surprised when it picked up the wins for both Best Picture and Best Director. These honors were perfectly timed as the film headed into its wide release at the box office.

During this period, 1917 continued to attract a large number of frequent moviegoers, but the percentage of infrequent or occasional moviegoers grew after the Globes win. Compared to its limited release, the wide release and Globes win hype saw an increase in attendance from both infrequent (up 2ppts to 19%) and occasional (up 3ppts to 30%) moviegoers. It is also important to note that attracting infrequent and occasional moviegoers (presumably via awards nominations and wins) could have impacted the increase in the number of theatres it was showing in and therefore box office return. 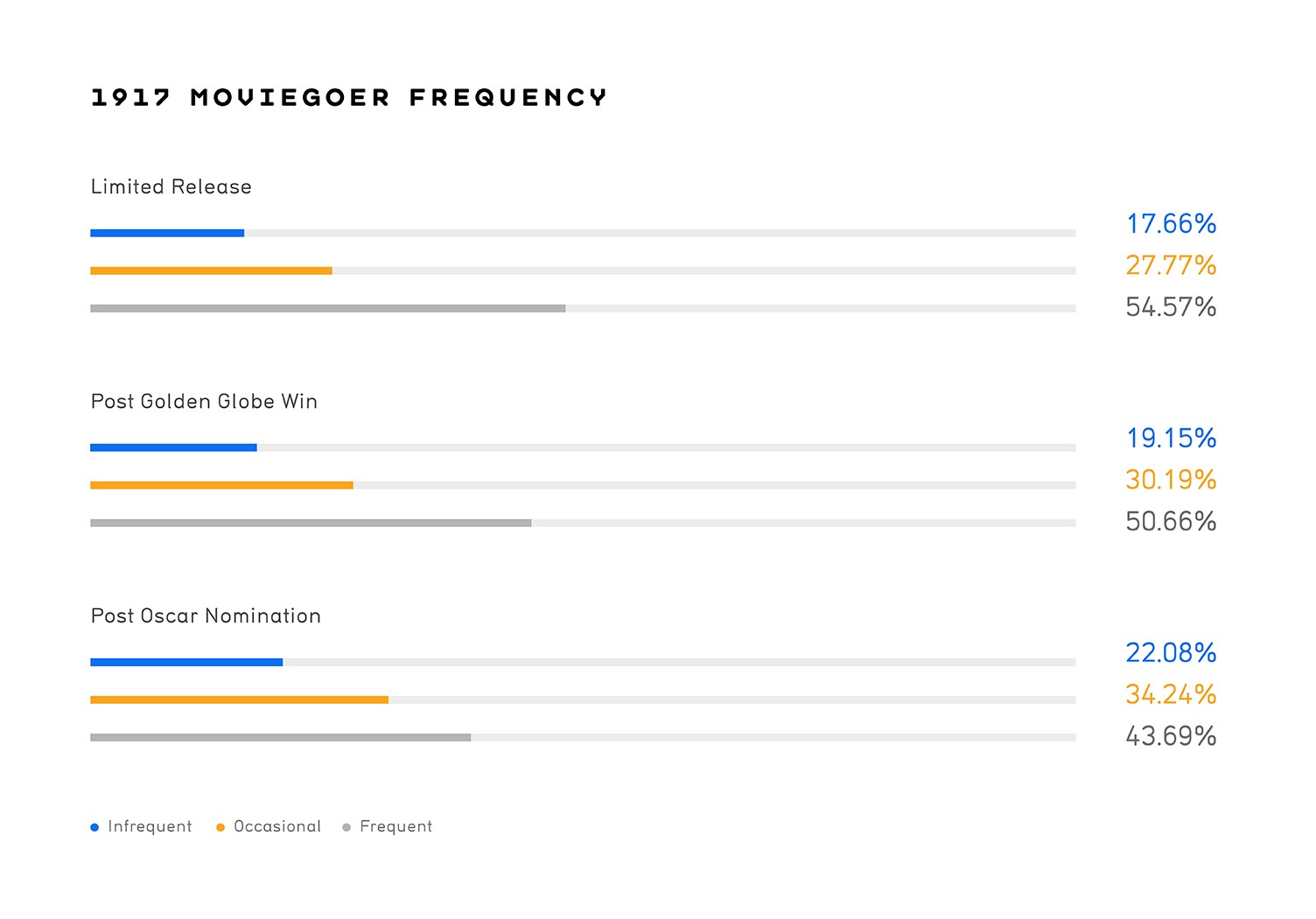 An Oscar® nomination can mean a box office boost for many films, and 1917 saw a large one. Post-nominations, 1917 expanded into an additional 178 theaters.

While there are some obvious and noticeable rises and dips in attendance among cohorts, the audience makeup didn’t change substantially as 1917 migrated from limited release to its wide release as a Golden Globe® winner, and then on to Oscar® Nominated title. What is clear, is that these nominations and wins did entice more infrequent and occasional moviegoers to the cinema which in turn saw an increase in sessions and box office. Now with 9 BAFTA nominations to its name as well, all eyes will be on this film to close out awards season and hit the $100M domestic milestone.