Parasite is a creature all of its own. The collision of worlds between the story’s polar-opposite families could easily illustrate the record-breaking and unexpected success of the film spinning Western cinema out of orbit. Breaking stereotypes, bucking traditional story arcs, throwing typical audience archetypes to the wind and bringing a starkly different perspective to global cinema, director Bong Joon Ho has achieved what no non-English filmmaker has achieved before: he’s captured the entire world’s attention.

The impact of Parasite is unmissable, and we wanted to find out which moviegoers made up the droves filling UK cinemas, especially considering it is now the highest-grossing foreign-language film of all time at the UK box office. Our EMEA Data Analyst, Paolo Negrotti, explored the variances of UK attendees compared to other foreign films, attendance in the US and award nominees.

Foreign language films notoriously attract older moviegoing segments, with 71% of those aged 55+ generally less deterred by the “two-inch barrier of subtitles”. Parasite saw half of its audience made up of moviegoers over the age of 55, while younger moviegoers (54 years and younger) were almost double of the foreign language film audiences in comparison, at 50%. Week-on-week this younger Parasite audience grew steadily in numbers while 55+ audiences slightly declined.

Parasite also lured more bums into seats, with infrequent moviegoers making up 37% of the audience compared to previous foreign favourites The Handmaiden and Shoplifters which sat at 19% and 17%, respectively.

Differences to the US 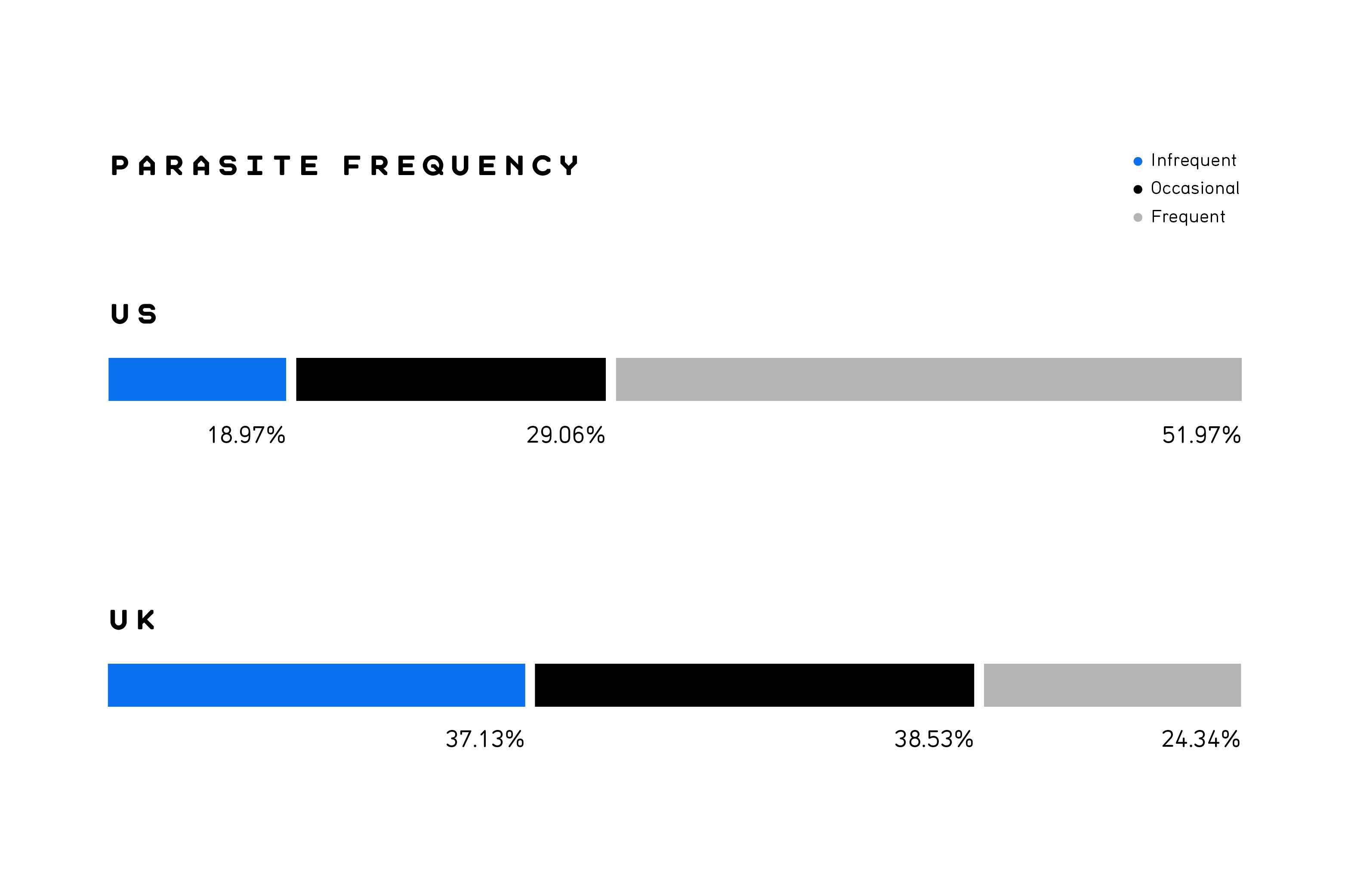 When comparing Parasite ticket purchasing trends between the US and UK, we found a 211% increase in individual purchasers in the US compared to the UK, while almost 70% of UK moviegoers purchased two tickets in a single transaction. Group visits of three or more moviegoers were also more popular in the UK, with group purchases making up 12.9% of ticket sales compared to 6.3% in the US.

Awards season firmly fixed a spotlight on Parasite once it made the list for the Oscar® Best Picture and BAFTA Best Film in 2020. But what effect did these nominations, and the Oscar® win, have on the film’s popularity in-cinema?

Overall there were similarities between Parasite and the 2020 Awards audience*, with both drawing a lower percentage of frequent moviegoers, 24% and 26%, respectively. The majority of both audiences were made up of a mix of infrequent and occasional moviegoers.

When observed over time, both the Award and Parasite audiences saw a larger increase in infrequent moviegoer attendance throughout their theatrical runs (11% vs 17%). Compared to other foreign films that only saw a 5% increase of infrequent moviegoer attendance throughout their entire time in the cinema. This would suggest that Parasite’s award nominations played an important role in the film’s popularity and ability to draw such a wide audience. 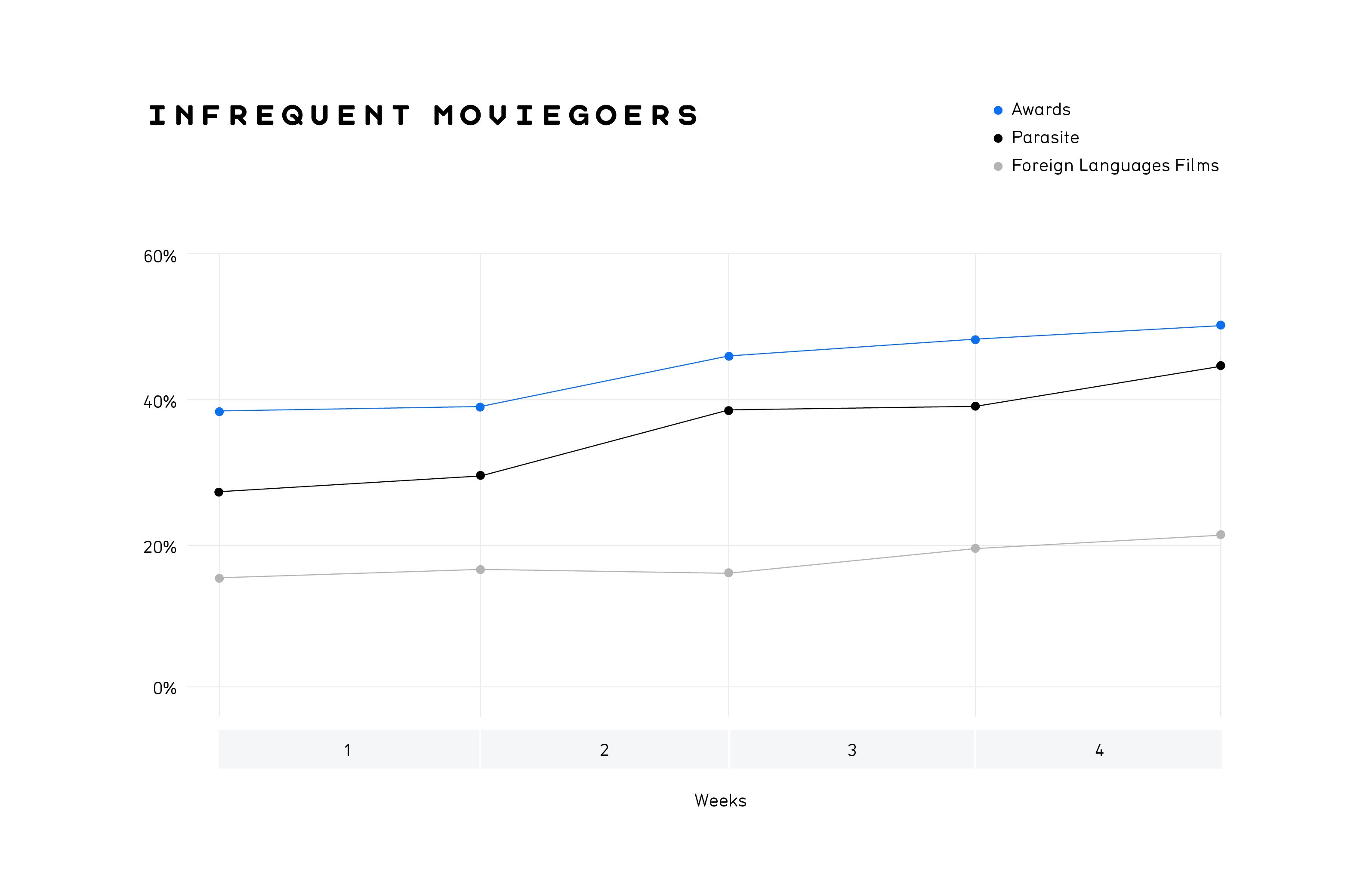 The roaring success of Korean filmmaker Bong Joon Ho’s Parasite is one long overdue. Its originality and award recognition drew a much wider moviegoing audience than others of its genre. Its ability to attract audiences of many ages and attendance frequencies, audiences that you’d usually only find at a large blockbuster, inevitably resulted in tremendous critical acclaim and box office success. A modern classic, a genre-bender and an unforgettable story - both on and behind the screen.

Exploring the Tastes of an Oscars® Audience

We wanted to see how similar this year’s Best Picture Oscar® nominees are to one another—in terms of audience tastes and preferences. 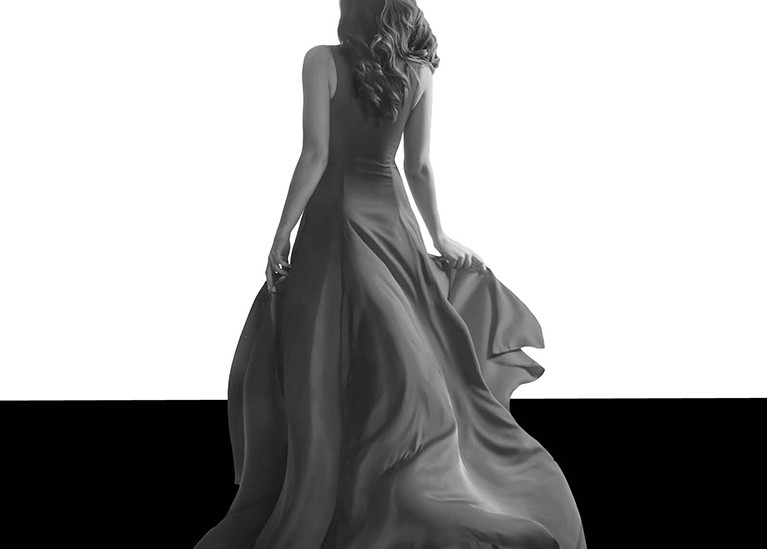 1917 is leading the charge this award season. We took a look at the audience behind the hit. 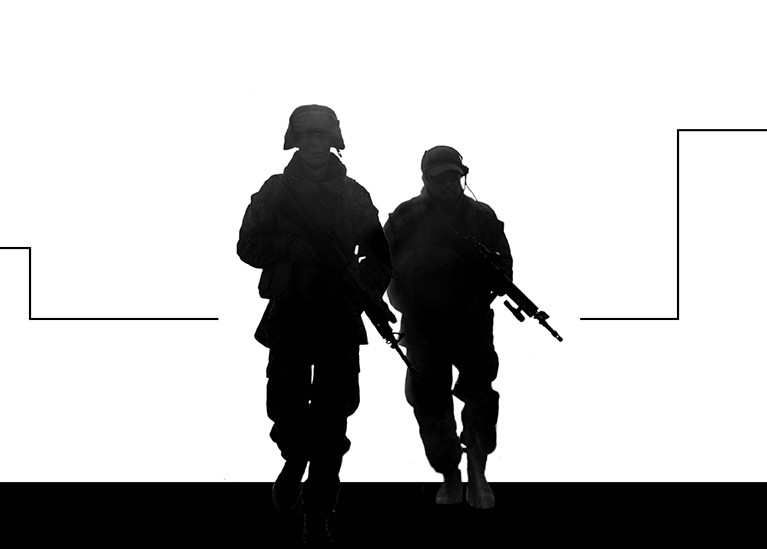