The relationship between moviegoers and the cinema experience is one that is personal and unique to every country. The way someone enjoys a cinema visit in central America is likely to be very different to an Arthouse fanatic in rural Switzerland, or a family of movie lovers in the UAE. At Movio, we are constantly exploring the many different connections, emotions and motives tied to attending the cinema and the ways in which we can ensure moviegoers across the globe are inspired by and connected to what they watch on the big screen.

In this blog post, Movio’s Managing Director of EMEA, Sarah Lewthwaite, takes a microscope to the broad and flourishing culture of Middle Eastern cinema and the moviegoers driving its success. Read on to discover exclusive insight into the behaviours of film lovers in the Mideast, which genres thrive and how exhibitors in this growing region can both optimise their guest experience and increase attendance.

Demographically, moviegoers in the Middle East are predominantly male and are skewed younger when compared to audiences in mature cinema markets such as North America and the United Kingdom. We found 77% of identifiable audiences in this region were male and 73% under the age of 40 (the largest cohort between the age of 30-40), compared to a much closer gender balance of audiences and a strong, thriving audience cohort over the age of 40 in the UK.

Looking into movie-going frequency, 30% of Middle Eastern moviegoers can be grouped into ‘occasional’ or ‘frequent’ moviegoers. This is similar to the UK market, but with a key point of difference in which this region purchase significantly more tickets than in other regions in a given transaction. This suggests that Middle Eastern moviegoers are more likely to attend as groups or families than in other markets. This provides an optimal and unique opportunity for cinemas operating here as if cinemas are able to increase the visitation rate of even one customer, that customer will likely purchase multiple tickets in that transaction, leading to an even greater uplift in box office revenue.

Which film genres are most popular in the Middle East?

One thing was abundantly clear from our findings: Middle Eastern audiences love Action movies. Audiences here strongly over-index in attendance to Action films compared to the UK and North American markets, with over 40% of admissions in the Middle East being for this genre. Interestingly, Middle Eastern moviegoers are much less attracted to family films, biographies and animation, the latter of which being particularly contrasting to other regions by making up just 12% of admissions compared to the UK’s 27%. 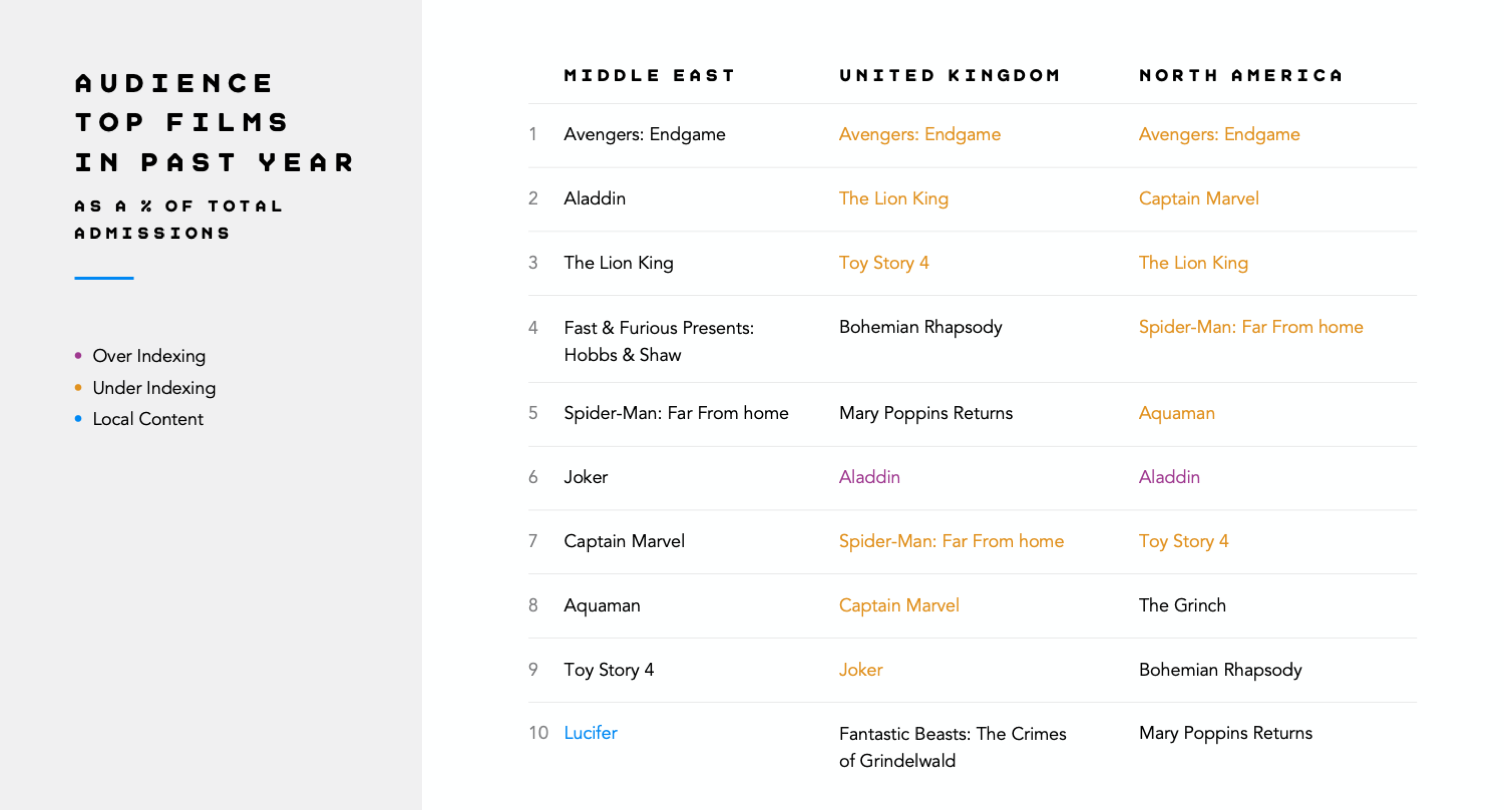 To further explore popular genres in the Middle East, we looked at the top 10 films of the past year, comparing admissions of identifiable audiences, or loyalty programme members, versus all admissions. Avengers was the top film across the board, however the Middle East saw an even stronger performance of this film when compared to other territories. A much higher percentage of members attended Avengers and other action movies, including Fast & Furious Presents: Hobbs & Shaw, than other regions. As previously mentioned, animated films do tend to under-index in this region, yet we found Aladdin and The Lion King clearly resonated with audiences moreso than other animation, resulting in high visitation.

Audiences in the Middle East are experiencing a high growth rate, with loyalty membership increasing by 42% in the past two years. This region also has more contactable and engaged customers than other well-established markets. This great momentum in recent years suggests that loyalty programmes are a very effective strategy for cinemas, providing an excellent opportunity to gather and leverage moviegoer data for marketing and operational improvements. Exhibitors in the Middle East should capitalise on this through an omni-channel marketing strategy, going beyond their customers’ email inboxes and communicating via channels such as push and SMS to expand reach. The more targeted a cinema’s communication efforts are, the more engaged their moviegoers will be and the more likely cinemas will be able to drive incremental attendance and spending from contactable audiences.

The Middle East is an exhilarating place to be for cinemas and moviegoers alike. With so much room for innovation and expansion in the film space, the opportunities for cinemas to grab a piece of eager moviegoer pie are abundant. A lot can be learned from the success seen in other cinema markets, but the region itself is as unique as the many other colourful parts of its culture. We’re excited to continue exploring the nuances and patterns of Middle Eastern moviegoers as we expand deeper into the territory, optimising the region’s cinemas and studios connection with their audience.

Sarah has over 20 years of experience in the cinema industry, joining Movio in 2014 to oversee the company's growth in the EMEA region. In her current position as Chief Client Officer, Sarah is accountable for Movio's revenue and the company's cinema, film studio and film distributor partnerships, globally. She also sits on the board of the Event Cinema Association and is a Director for the Cinema Technology Community CIC. Connect with Sarah on LinkedIn

Finding the right audience for the theatrical release of small films. 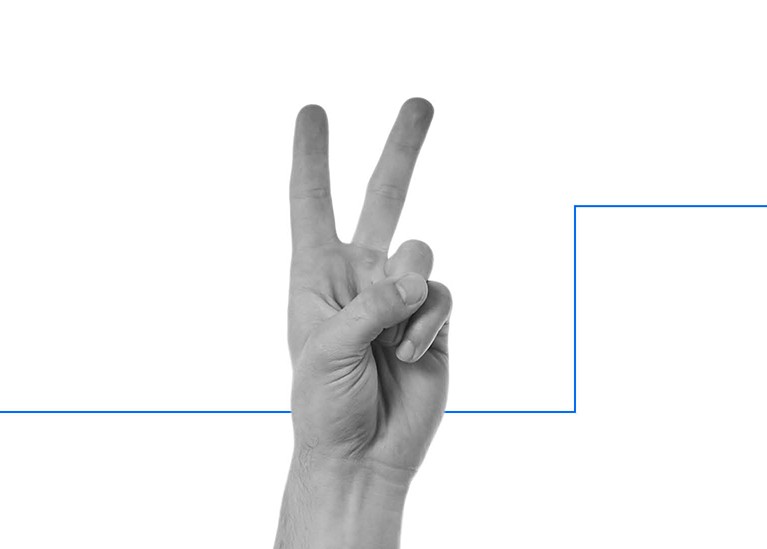 The Diversity Demand: Securing The Future Of Moviegoing

The results are clear: Representation matters. 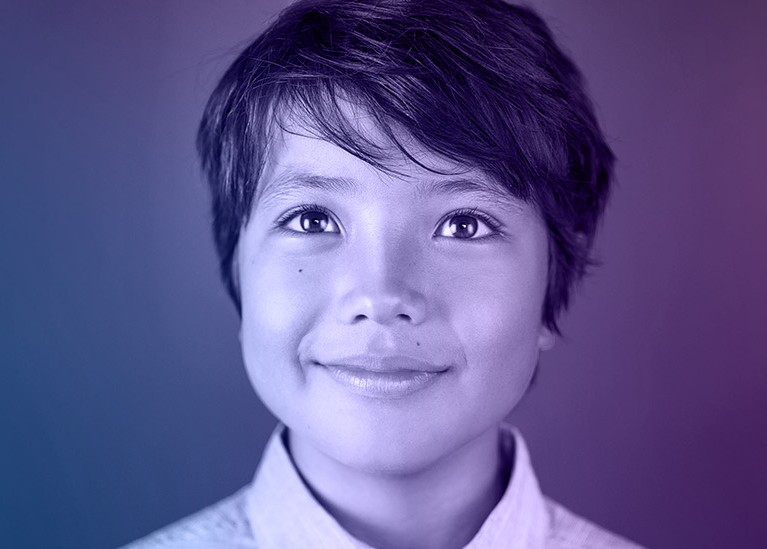 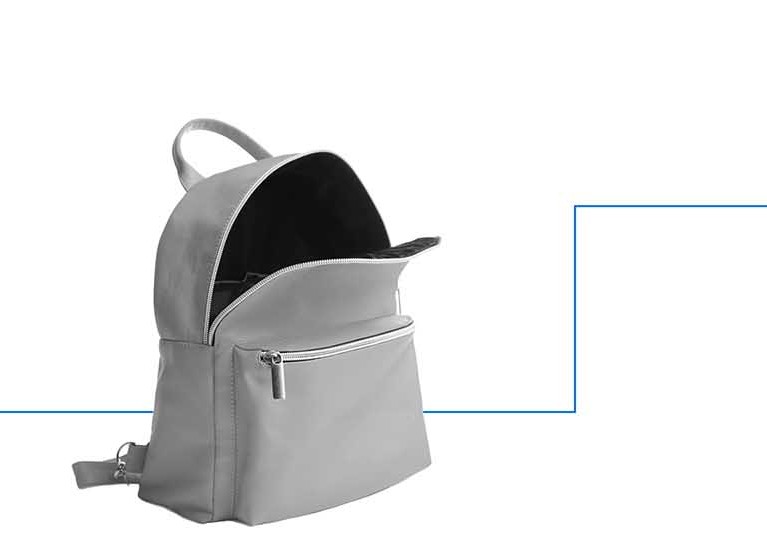