Reporting on the success of loyalty campaigns has traditionally been a complex and difficult task for cinema marketers. How effective are campaigns? How can you grow loyalty program revenue?

Having the right data makes it possible to accurately see the effects of campaigns, measured against control groups who don’t receive offers. This means through the use of loyalty programs, cinemas are increasingly able to design more effective campaigns, targeting the right customers.

Looking at data from a sample of 100k members, we will show how an evidence-driven understanding of your members can increase loyalty program revenue by more than 30%. 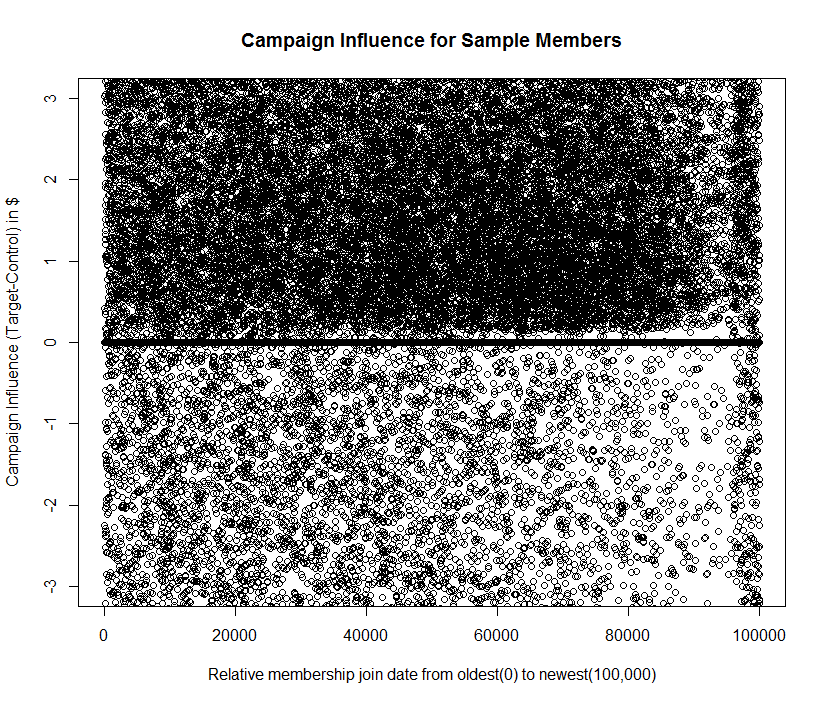 In the graph above every dot represents an individual loyalty member in our sample of 100,000. Every member in this sample was targeted by at least three campaigns, and by three controls, where they received no campaign.

We calculated each member's average spend during targeted campaigns, and their average spend when in control groups. Campaign Influence is the difference between the two amounts spent (Target-Control).

Members are ordered from oldest to newest where zero is the first member and 100,000 is the last member to join. 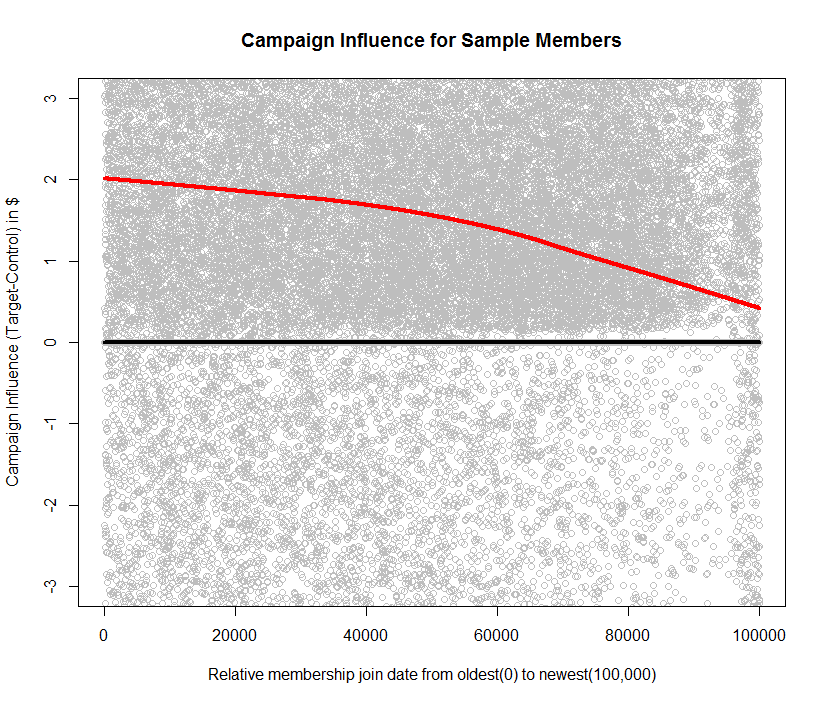 Members on the right hand side have been in the program for a shorter period than those on the left. The graph shows that the longer you have been a member of the program the more strongly influenced you are to campaigns. 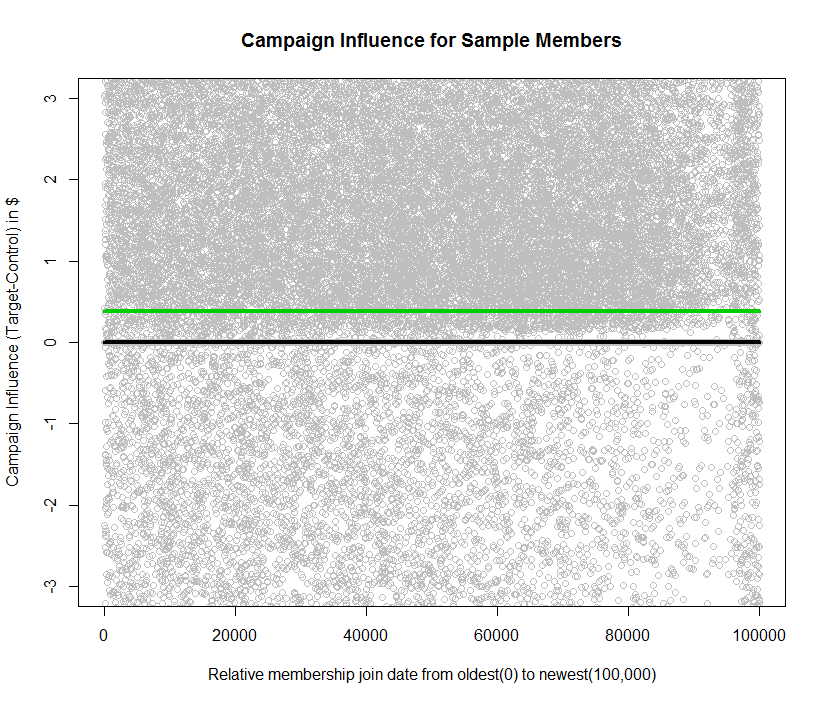 The average increase in spend was $0.38 if a member had seen a campaign.

The members shown in a higher position in the graph are associated with more spending when targeted with campaigns.

Members in a lower position in the graph are those who spend less when they are targeted by campaigns.

However, the majority of members are positively influenced.

Why Targeting is Important 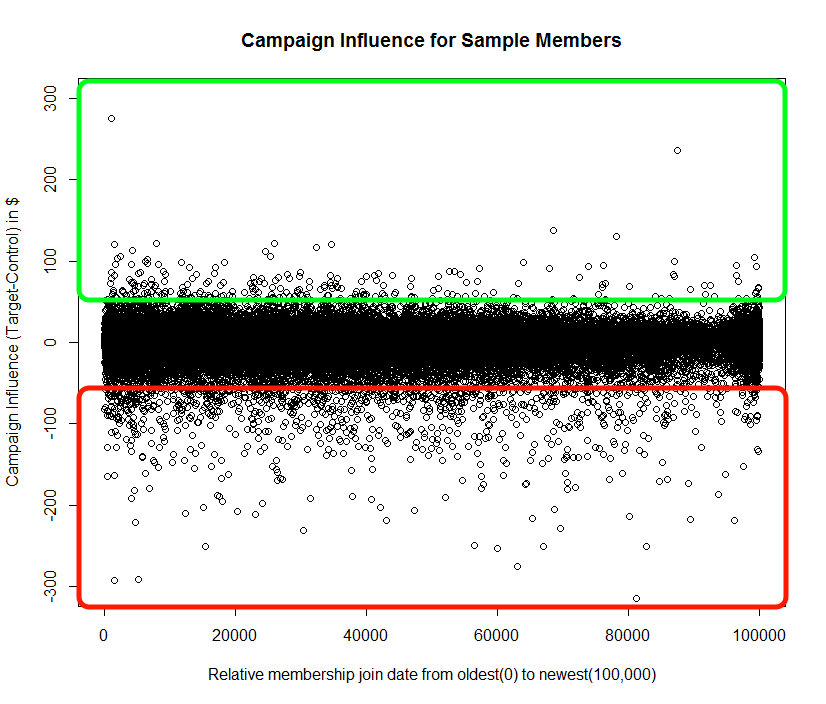 The red box contains more members who spend a lot less after receiving a campaign.

This suggests that there exists a large group of members who would have spent more if they were targeted more appropriately. 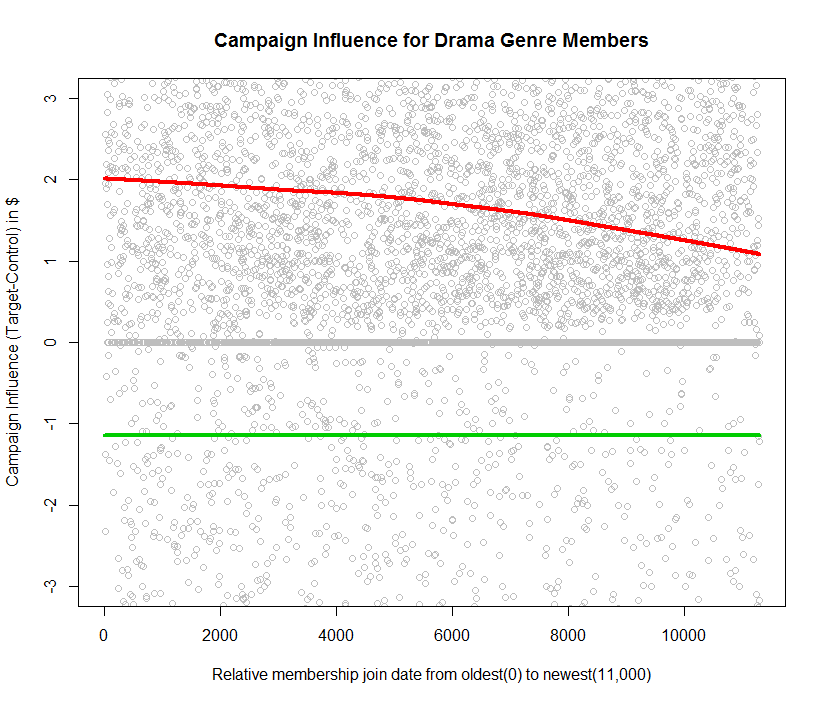 Campaigns need to be carefully designed if targeting this group, or one like it. Campaigns sent to these members are linked to a loss of revenue. There are two options to increase revenue from this group. You could choose not to target them or target them better (which may even mean targeting them less). 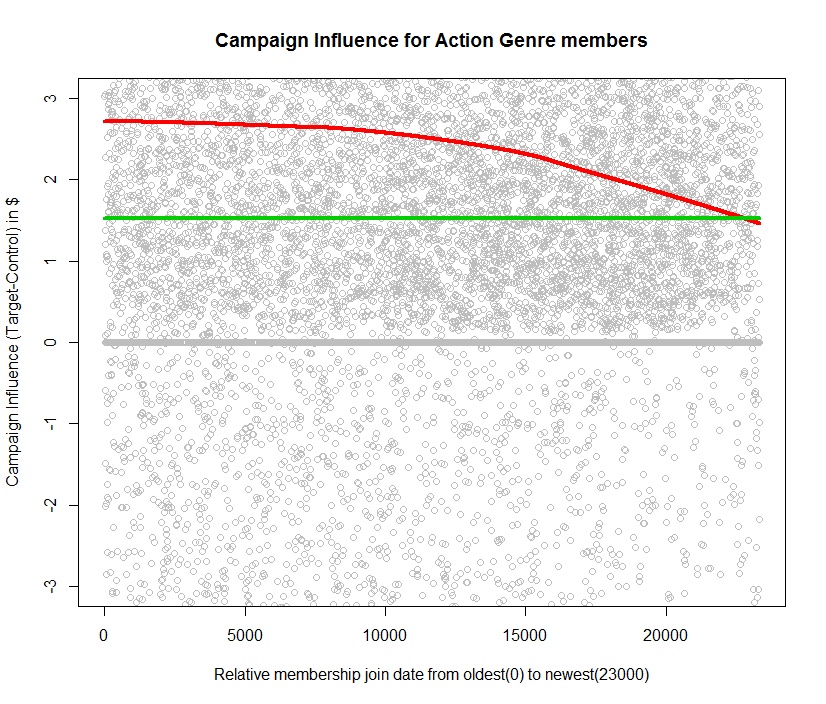 An action-genre member spends on average $1.52 more when targeted by a campaign. They spend a lot more when targeted and are the most influenced group by a large margin. Slightly increasing campaigns to this group is a viable way of bringing in extra revenue.

We can mine insights to predict member-spending behavior.

Overall, members spend $0.38 more on average when targeted by a campaign, meaning revenue increases by $38,000 for every 100,000 members targeted.

Drama-genre members spend on average $1.10 less each time they were targeted.

Action-genre members spend on average $1.52 more each time they were targeted.

Action and Drama genre members are only two of many groups. These were our initial results and are specific to the cinema chain analyzed.

If members received one campaign per month:

Evidence-driven targeting of drama-genre members results in a 31% ($4.3m) increase in campaign effectiveness.

*Due to the nature of the data these results are preliminary. Experiments and other robust methods are work in progress. 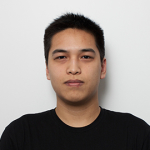 Ex-Digital Marketing Manager at Movio. I love new technology and using digital tools to connect Movio around the world. @ingridgrenar or connect on Google+ or LinkedIn